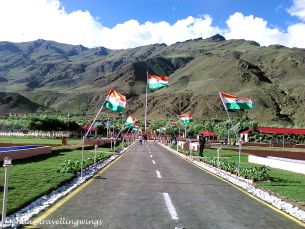 So where was I? In Kargil of course. On our journey from Srinagar to Leh, via Kargil. After being stuck in Srinagar for 2 days, it was time for us to be bold and courageous and start our much coveted journey to Kargil. Dawa, our guide and charioteer, was impatient of wasting his time in Srinagar. He was determined to take us to Leh that day and by the look on his face, he would have flown us there if he could. 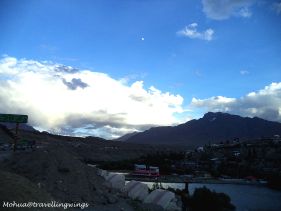 So after getting stuck at Sonmarg for 3 hours, as the army was clearing the mudslide near the Fish Pond in Baltal, we could reach Kargil at 4:30 pm in the evening. We had crossed Zoji-la Pass(by the way a La means a pass) in a slow moving cavalcade, and breathing in the wonderfully cleansed air at 11,640ft height. Heavens above. But this post is about Nimmu, and why I was so taken by this small remote town hidden within the ominous folds of ranges of Ladakh.

Why shouldn’t we take coconut chutneys in Kargil!

So, as I was saying, after crossing Zojila, we reached Kargil via Drass. Then took a night halt. Kargil had been cut off from the supplies for 3 days because of the mudslide. The canteen at the War Memorial is known for its reasonably priced yet good quality food. But being without supplies for so many days had probably taken toll on the quality of the food served and we were served a coconut chutney, which had soured and smelled. The gnawing hunger pangs made my reasoning mind go blank, and lo and behold, I ate it.

The result was a terrible stomach upset from morning 3 a.m and of course medicines (which do not work in mountains, like: Orindazole, Metrogyl etc) and loads of ORS with medicines carrying lacto bacillus, was the only solution. We started towards Lamayaru, our next stop. 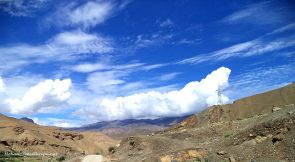 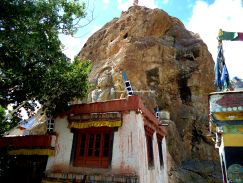 T0 resume the tale: Mulbek. So at Mulbek we saw and met the huge 9ft high Future Buddha named Maitreya which was said to have been constructed in 7th or 8th century. You can only see the bust from the road. Mulbek is appearing as one of the stop over towns with good homestays providing good service to the tourists. This town too has River Indus flowing through but is quieter than Kargil. After the ‘darshan’ we continued with our journey to Lamayaru Monastery.

Did you stop at Lamayaru? No? Oh! You should have! 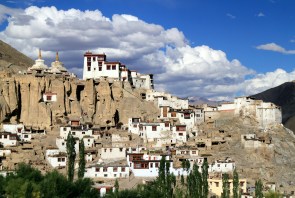 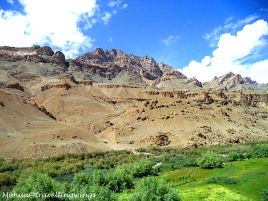 The monastery or the Gompa is one of the most ancient one. It was founded by Mahasiddhyacharya Naropa an Indian scholar who, as the legend goes, had dried up a lake which was the only resource of natural water in the area. It was then with the consent of the villagers, he constructed the Gompa to appease the nature. It belongs to Red-Hat sect of Buddhism.

This monastery houses almost 150 monks and artefacts and manuscripts, wall carpets, and a 100 eyed-eleven headed statue of Chenzing. For me the bigger attraction was the locality and the topography. 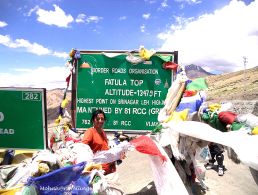 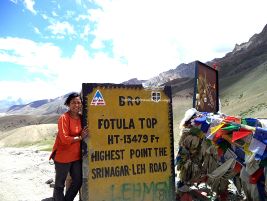 From Lamayaru, one road goes towards Prikiti La towards Zanskar. But we won’t go there now and instead continue to Namik La- 12,198 ft High, Fotu La 13,479 ft high and then towards Nimmu. On the road to Nimmu, there are numerous sharp bends in the looped roads called Hangro Loops. There are 18 loops in total and is quite a ride as we travel towards Gurudwara Pather Sahib in Nimmu, just 55 kms form Leh. 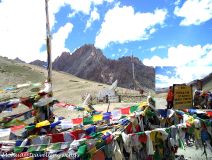 Nimmu, what stole my heart:

Our driver Dawa, stopped the car at Nimmu. The beautiful valley by a range of barren mountains. The mountains are sandy and barren. Now Dawa had a story to tell about how the mountains turned barren. You can read that here. Then he told us that, down there near the river was his brother’s house and he would just go and meet his nephew who has met with a bike accident the day before. We looked down and the distance looked dubious for a 10 minutes’ climb, that he claimed. We agreed reluctantly and he vanished immediately. In a flash he was near the village by the river. The distance he covered must have been at least 1.5 kms. We suspected him of being ‘not human’ for a moment, such was his speed. 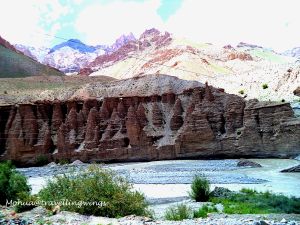 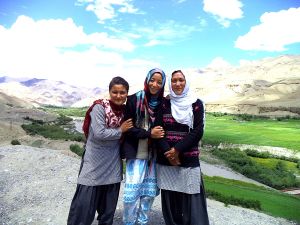 That is when we met Tara: She was coming back from school as the school had declared a holiday, owing to the demise of our ex- President Dr. A.P.J Abdul Kalam. The gloom of death had been left behind in the classrooms and with salted peanuts in packets, they were all having a great time going home. Tara was curious about my camera and wanted to see what kind of photographs I took. Mehbooba kept on giggling. The boys were a bit cautious at the beginning and then they too came forward. We discussed what they studied and how they all did not like school. So sometimes they played hooky. The innocence and the wonderful heartfelt smiles as we talked on and on, just melted my heart. All the girls helped their mothers with her kitchen work and the boys smiled shyly. They too helped, but were pampered a bit more than the girls. I sighed. The picture was quite similar. As I started taking the photographs the girls and boys separated and stood in two different groups. The social norms and our rigid structure. 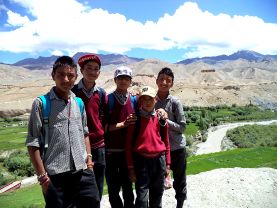 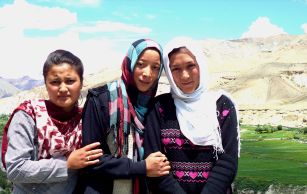 Then Tara came forward and offered us some peanuts. I had to give her a hug. We offered her and her friends some chips and chocolates. They gifted us with a wide smile. Nimmu beauties bowled us over with their charm. The school days and those days of merriment all came rushing back to us. I savor those moments more, as I was travelling with my closest friend Aparna, who had traveled all the way from Colorado to be on this trip with me. We have been friends since our nursery school days and had continued to be together till graduation. We had just found a snippet from our childhood.  Mountains in our hearts we left for Gurudwara Pather Saheb & Moon Land. 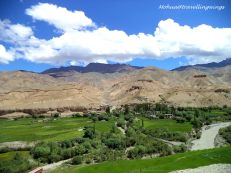 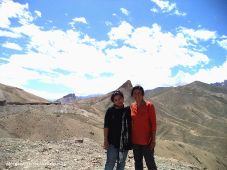 To know what happened before this, click here for curiosity:

Pics and write up by : Mohua Roy.