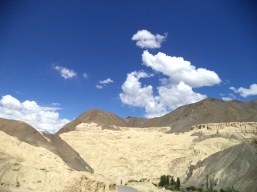 I have a serious disconnection with titles like ‘6 road signs that will have you crack your ribs’ and a subtitle ‘The 6th one is the most hillarious’ . Hence, I write stories, experiences which brought a smile on. The BRO or the Border Roads Organisation in India’s border states use very lucid expressions as far as their road signs are concerned. Miles after miles, wonderfully constructed roads to bridge the gap between distant places and make them accessible to mortals like us,that is what BRO does. The job is excruciatingly tough and the amount of labor is immense and never ending. The terrain is rough and there are mountains, gorges, rivers , rivulets and stretches of colored mountains and miles after miles the roads.

Leh to Pangong, Srinagar to Leh and Leh to Manali all have beautiful stretches of roads which seems God send to tired minds of city dwellers. The terrain is rough and the construction of the roads are done under very tough conditions.

The BRO was formed on 7 May 1960 to secure India’s borders and develop infrastructure in remote areas of the north and North-Eastern states of the country.[3] In order to ensure coordination and expeditious execution of projects, the Government of India set up the Border Roads Development Board (BRDB) with the Prime Minister as Chairman of the Board and Defence Minister as Deputy Chairman. (curiosity helped by Wiki).

Tough conditions, stormy weather, deep ravines, highest altitudes nothing beats the brave hearts  of BRO. They keep on with their efforts with the aide of fantastic sense of humor. Here is some of them 😀 😀 – 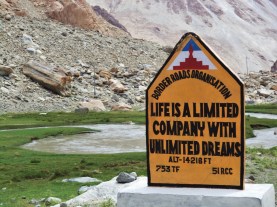 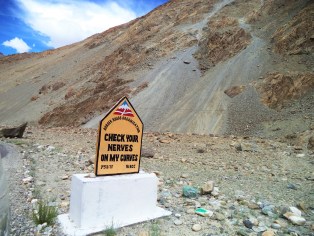 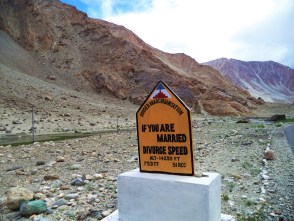 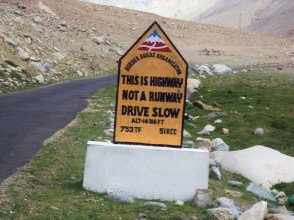 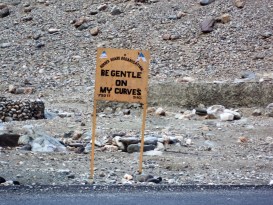 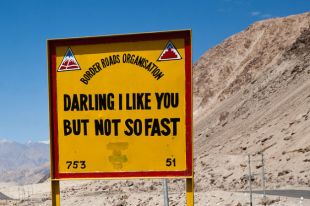 A journey to the hills has always added to my booty of experiences.  Some of them are just obnoxiously hilarious at times. Well to cut story short, there are times while travelling in hills that you will never see anything close to a washroom. Hence nature calls with nature’s spacious terrain, to use it at its full splendor. But being civilized has its own fallout. So on our way to Pangong, which is 5 hours up and 5 hours down, we needed a washroom. The road being completely barren it was difficult to find even a shaded place. So when we reached Pangong Lake,we were completely charmed to see ‘Rancho Eatery’ and ‘Three idiots Hotel’ and many more strong influences of our venerable Film Industry to save a travelers’ life. Hence we went into one such eatery which boasted of ‘Bathroom with flush and commode and running water’. Well we were of course in Kashmir and we definitely were convinced that we were indeed in heaven. A bathroom with flush commode and running water!!! The real story was this: 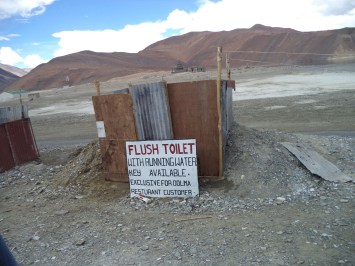 Hidden behind the signboard, there is a drum which had water stored. So anyone using the ‘toilet’ in desperation, would indeed have to run with the water inside the barricaded area 😀 😀

There was a commode,Indian style, and there was a flush which did not have either any water or a handle. But this was godsend in middle of nowhere. The best part was, there was a signboard inside just on our right hand side wall which read ‘All types of food available here↓. Chinese,Continental, Indian. Please contact hereafter’. They had indeed gone completely global, and there was no discrimination. The sales tactics was too good. What empties need to be filled in. Simple logic 😀 😀 😀

But we were so very glad for that well fitted little ‘toilet’ that had saved our lives, to say the least. Good job guys ! Keep going.

Picture and write up: Mohua Roy.

2 Responses to Hilly Humor: Tales on road to Leh, Ladakh.