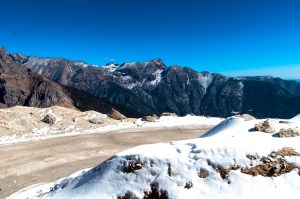 Sela Pass- Through the entire Himalayan range ‘La’ means a pass. In ladakh, I came across Zoji-la, Namik- La etc. and here in the Eastern Himalayan Range there was Se-La. Situated at the altitude of 13700ft; Se-la Pass is always covered in snow. This pass is main route to Tawang and then on to Tibet. 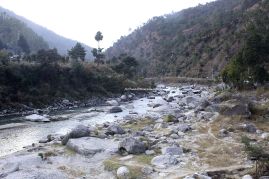 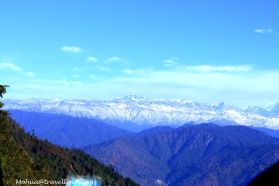 The panoramic view of the ranges and the valleys from Se-La is something to behold. The pass has a romantic tale attached to it. It has a very famous war memorial named Jaswant Garh, which is dedicated to Jaswant Singh,an army man who fought for 3 days without any backup from the main regiment to keep the Chinese forces at bay, in 1962 Indo-Sino war. 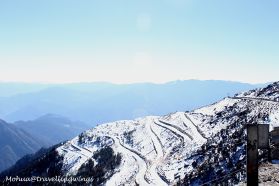 The way to the Pass- Sela 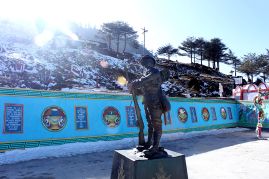 The Romance in Ranges: Sela was a tribal girl who fell in love with the valiant warrior of Indian Army while he was posted at Sela during 60’s. The romance grew as they would often meet and Sela would hand him the goodies from home. Sela had a father who was much against this association and would often express his rage to his daughter. Typically (very filmy though, but it happened), Sela would not listen to her father and would keep her dates with Jaswant, and the romance continued. Then one day a calamity struck and Chinese forces attacked Arunachal hence India.(Chinese Forces never did have any respect for the institution of ‘Love’; the unromantic lot that they appear to be). Indian forces did not have any resistance ready, hence Jaswant had to strategize the defense. He serially arranged many rifles on the hilltop, to give an idea of an army’s presence there, and he himself took a position to defend single-handedly. Sela, on her loving part, kept his morale up by supplying food and water but after 3 days Sela’s father betrayed Jaswant to the Chinese Forces and he was caught by them and beheaded. Sela, betrayed by her father could not take Jaswant’s death quietly; she jumped from top of the hill. The lovers died a premature death to be united in heaven (this bit was added by romantically me). What a legend! 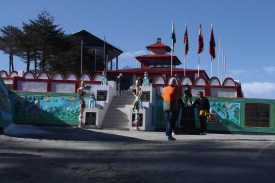 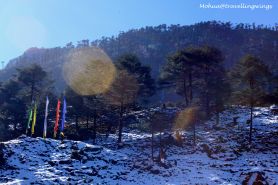 The snow covered Se-la is a divine sight to die for indeed.

Information:In Jaswant Garh there is a military canteen area, where you get excellent winter gears. Anyone who had forgotten how cold -5 degrees can be can restock their winter wear from this subsidized store. And cups of hot tea is served free of cost, at this canteen. Believe me its a blessing. 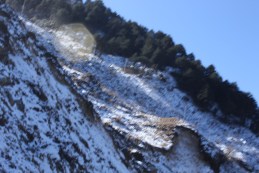 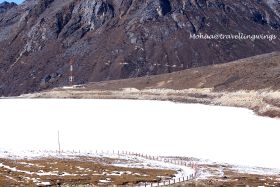 The Paradise Lake at Sela 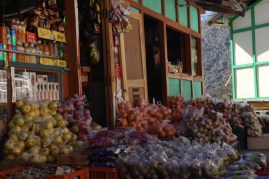 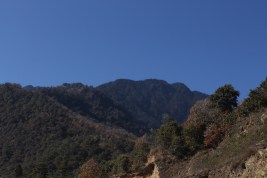 The roadside stopovers have well stocked fruit seller’s shanties. The sellers insisted to us that all the fruits were locally produced. The most luscious of them all, was this variety of apples called- Green Apples. Juicy succulent and stays fresh for a long time. Nothing less than the famous Golden Apples if not more. ‘Aap idhar sehi Golden apples le jayiye Saab’. And we did. Baskets of it.

Tawang- We left the glorious beauty of Jung Falls to continue towards Lau Basti, a small settlement in the lap of nature. This where apparently Madhuri Dixit had danced to the beats of a song in ‘Koyela,’ a blockbuster Hindi movie. As we traveled on,, we suddenly found the gateway with ‘Welcome to Kameng’ written on it. There we were, a chattering shivering bunch of tourists, simply excited with snow in view and there the magnificent view of Tawang was waiting to assail our senses. 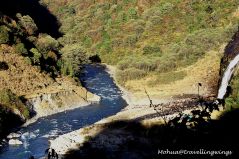 A shot of our Guest House. Pic Credit- Arnab Chakraborty

About Tawang: An important district in West Kanmeng area of Arunachal Pradesh. The name Tawang was derived from ‘Ta’- Horse and ‘Wang’- chosen. This name was chosen by his holiness Mera Lama Lodre Gyatso for the famous monastery in 17th century. Main inhabitants of Tawang are the tribals; Monpa, Bhutia, Adi. With the majority of the population consisting of Monpa tribes. The main religion followed is Tibetan Bhuddhism. As the area was under dispute between China and India, an inner line permit is required to enter this heavily guarded territory. The permits have to be made at least a month ahead of expected journey date.

Some must visit spots:

Warning:Although Tawang is mesmerizing in winter but avoid December to plan a trip; the temperature dips to -10 degrees too. Boomla Pass and the Sela Pass is sometimes closed because of heavy landslide and snowfall. Hence, please check the weather before you attempt to go up to Tawang. Keep two extra days in hand in case you are snowed in. Because of poor connection you cannot call your boss to give any explanation. In the city, there is no electricity. That is only supplied for 1 hour a day. So the tourists have to rough it out. Carry extra blankets and hot water flasks. Although the water supply works well. And there are no morning challenges.

3 Responses to Tawang Diaries 2- Through Sela Pass to Tawang