Deprecated: Function split() is deprecated in /home/travellingwings/public_html/wp-content/plugins/wordpress-hit-counter/image.php on line 66
 Cuisines of Kashmir: The lure of the Baked Goodies | Travelling Wings

Cuisines of Kashmir: The lure of the Baked Goodies

Posted on February 7, 2016 by Travelling Wings 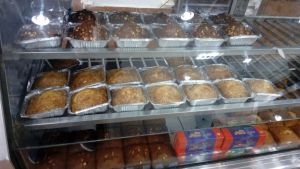 Kashmir & The legacy of Baking.

The bakeries in the valley carry their own flavor. The shelves are lusciously enriched with variety of bakery products like Katlamas, Kulchas, Khamira Bread, Modur kulcha, Khatais and Bakerkhanis. The products took on a Western turn where the bakeries introduced Puffs, creamrolls, stuffed kulchas, patties and pastries. Stuffed Kulchas , mitha bun and different types of breads just take the cake in late 17th century with. The noon chai too has it’s share of delicious accompaniments. The kulchas , tsots and tsochvoru topped with poppy seeds, telvoru lavas (bagel like taste) and baukerkhanis are just few of the variety that a Kashmiri may have in his bakery.

History of Bakery in Kashmir: 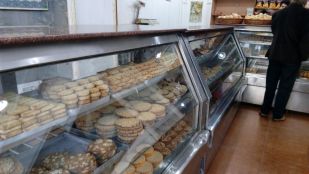 The valley was inspired to bake with the invasion of the land Taimurlung from Central Asia. The culture of bread thus began. Breads like Lavash (Persian) and Lavaseh (Kashmiri) and the common Girdeh bread, the chochiwurs, the kulchs (Kaluchehs in Persian) are all descendent form Central Asia-namely Persia and area around. A baker is called a Kandur. The Kandur bakes Tsot (breads) and rest of the delicacies.

During British rule,with the Gora Sahibs visiting the valley during winter times to find a flavor of the “home away from home”, the bakeries initiate Western concepts of baking. Hence the culture of Patties, pastries and wafers and stuffed breads came into vogue. The couture eating had begun. 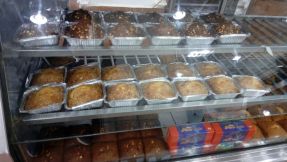 Bakery Products have become a way of life for them. The day begins with kuchas in tea, then breakfast light Lavasas and Girdas with a splash of butter again with tea. Sheermal,Katlamas,telvor or ghyav chot is the offering with noon tea,i.e tea served in the afternoon. The nighttime breads are:chochvor or lavasa. 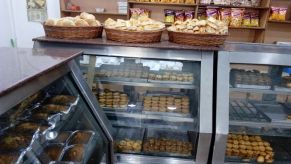 During marriages too there is a ritual named Roth Khabar:

Roth Khabar
On a Saturday or Tuesday after the wedding, the bride’s parents send a rothor a traditional, long freshly baked cake which is one metre long and two and a half metre wide  (bread decorated with nuts) and Nabad Not (big bowls made of sugar crystals,dry fruits and shireen), to their son-in-law’s family. Then she is given salt as shagun. History says that this custom was started when the brides had to travel for days to reach their Groom’s house after marriage and the family assured that she would at least have small portions to eat in case she felt too shy to eat with the groom’s family.

Where to find the Goodies? 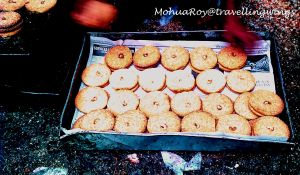 Bakery biscuits baked in coal bakery, found these on our way to Gulmarg.

All over Kashmir. the more stylish ones in Srinagar and the local ones I could see everywhere where there was a small market. The goodies are generally fresh-baked, except for the biscuits which are packed for preservation. Apart from Ahdoos, Mughal Durbar and GeeEnn Bakery, there are numerous outlets like- Jan Bakers, Empire Bakery, Janta Bakers and Premier Cake house around Boulevard Road, Residency Road and around the lakes and the gardens in this awesome garden city.

My favorite is Ahdoos, introduced to by my friend who was posted in Srinagar Prasar Bharati at the time of my second trip. I vouch for their coconut crisp cookies. With the horrible sweet tooth I possess, I almost melted at the sight of them in the display bar. I generally have a complaint with coconuts as they leave a residue inside the mouth after chewing off the sugar mixes. Ahdoos bakery somehow manages to keep the cookies light, crumbly and an absolute’ melt in the mouth’ experience. Then of course I had to pack some and then some cookies, cakes and biscuits. Believe me, I could almost hear Santa’s jingles in my ears with such goodies in my basket.

On my first visit, my dear friend Wasim, had offered a grand treat at his home where a spread of goodies from a local bakery was not only a major part of the platter but also much of it was packed and gifted to me for my trip mates. Wonderful people, wonderful land and unforgettable memories. 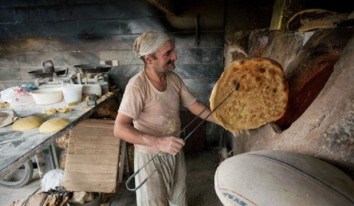 3 Responses to Cuisines of Kashmir: The lure of the Baked Goodies