Deprecated: Function split() is deprecated in /home/travellingwings/public_html/wp-content/plugins/wordpress-hit-counter/image.php on line 66
 Trip to Ladakh- Srinagar to Kargil, the beginning. | Travelling Wings

Trip to Ladakh- Srinagar to Kargil, the beginning. 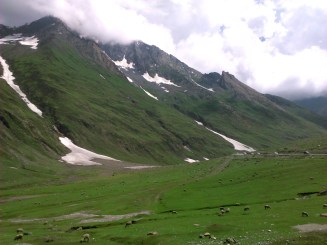 Ladakh, the land of  Lamas, thupkas and endless mountains, has always been a mystery for me and would beckon me sporadically over the years. Trying to match my schedule with other friends who had planned  for a trip to Ladakh with me, proved to be futile and I decided to be a solo traveler. Just then my childhood friend called up to let me know that she would be coming to India from Colorado USA, around the time of my scheduled visit to Ladakh and would love to be on that trip with me. So on a planned scheduled day our journey began with a flight from Delhi to Srinagar.

Ladakh can be reached by:

We decided to opt for the Srinagar to Leh route by car, as we were facing a time crunch in our schedule. With an evening’s stay over at Srinagar , the next day early in the morning  we were to start our journey to Leh . 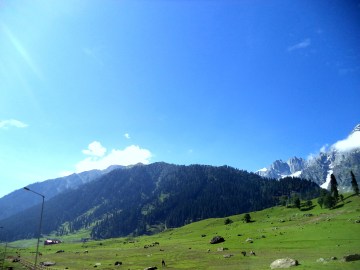 Sonmarg where we explored the nature and yet found wanting more.

The routes leading to Leh are prone to landslides, mudslides and few more natural calamities. So while planning for a Leh trip please keep 2-3 days aside for delay due to any such disaster. We were stranded in Srinagar for 2 days as a huge mudslide caused by an unforeseen cloudburst near Baltal had taken 9 lives and many a car was drowned . We could later see many cars on the highway, mud splattered and with broken windows and much damage caused by the massive cloud burst in the area. 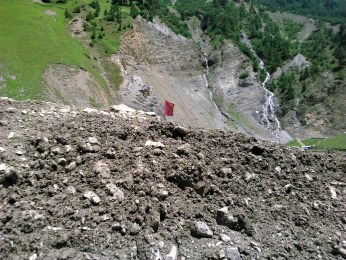 Landslide due to cloud burst

While travelling from Srinagar to Kargil , we felt absolutely on top of the world and was completely zapped by the beauteous nature all around us. Spirits were high and with corrupted food to sustain on, we were in love with the journey. Sitting in the cramped office spaces and small flats in the city, we often tend to forget that the sky can be so blue. Tinged with a shade of Indigo, it  seemed to be cut out from a painting. The greenery with dancing streams too looked lush and and bouncing with life. As we were stranded, we got some time in our hands to explore the area around Sonamarg. The main road had little shanties serving alu parathas, half cooked omelettes and milky tea or rather energizers with sugar syrup served as their ‘minu’. 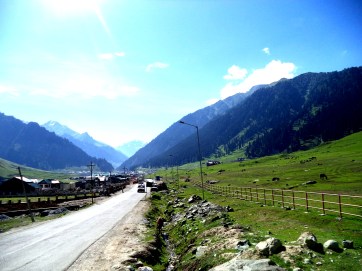 Way to Sonamarg. The traffic was stopped beyond this point.

However, with army doing their best to clear the deluge and work going on, we were again stranded for sometime in Sonamarg. Talking to the police officers deployed there, I tried my best to get some information out of them, while A was trying to establish a cross Atlantic connection with her beau. All of them ascertained that the traffic would move after an hour. Well it was after three hours  we could begin our journey again. The traffic was very slow on a dusty road but it was nevertheless moving. 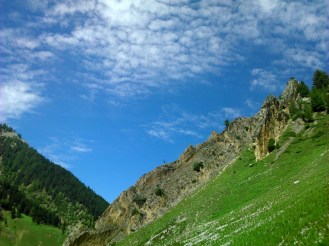 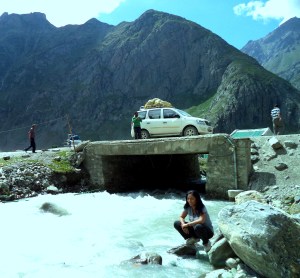 Watching the river flow. On the way to Zoji la

Sonamarg roads were completely abused by the sudden cloud burst. Roads had disappeared and had been replaced with muddy and wet tracks. With a slow moving traffic and with loads of pleasantries exchanged with fellow travelers, we moved on to Zoji La Pass ( famously known by the local people as Jozla ) It lies in the western section of the Himalayan Range. 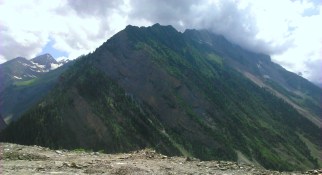 As we approached the pass, an ominous feeling of going nowhere set in me. We were at 11,649 ft above the sea level with endless mountains and roads stretching out for miles together. We reached within one hour covering a distance of 20 km and slow traffic.This is the second highest pass after Fotu La which is situated further towards Leh, in Srinagar Leh highway.

Pakistani forces have often attempted to make this Pass their very own, but our brave soldiers have often put Pakistani dreams at rest and have guarded  the territory with zeal and dedication

Crossing Zoji La we carried on to Drass, but as we had to reach Kargil before sunset, we didn’t stop at Drass and carried on to the serenity of Kargil. 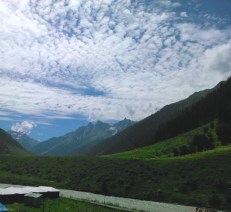 The mountain, a river and a campThe most memorable sight in Kargil was the brilliantly built war memorial in the lap of the splendorous nature.

After staying over at Kargil for the night, we would continue our journey for our final lap to Leh.  On reaching Kargil I almost decided not to go back ever again. The serenity and most of all the surrounding was enough to keep anyone glued to the spot. 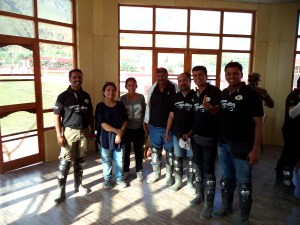 Our motivated friends had come riding their motorcycles from Maharashtra to celebrate 26th July Kargil Day.

But more adventure was to come. And yes, we met some wonderful people on our stop over there at the war memorial. These people had come riding their motorcycles from Maharashtra to celebrate 26th July Kargil Day. They had sent invites to people using their Facebook page and had collected around 250 people on that day in Kargil to celebrate it along with the Army personnel deployed there. We were there on 27th July and still were quite taken in by the air of celebration that still hung in the air, and had a talk with those enthusiastic brigade as to what drove them to such a tough goal. 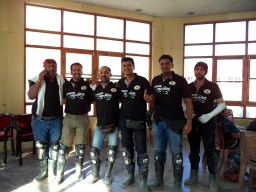 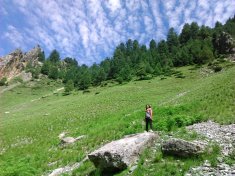 Written and Photographed by: Mohua Roy

Watch out for: Next Stop- Ladakh- Kargil to Leh.

23 Responses to Trip to Ladakh- Srinagar to Kargil, the beginning.