Deprecated: Function split() is deprecated in /home/travellingwings/public_html/wp-content/plugins/wordpress-hit-counter/image.php on line 66
 A walk down the memory lane: Delhi. | Travelling Wings

A walk down the memory lane: Delhi.

Delhi has always had it’s fascinating corners. I was introduced to the first one when we were staying in R.K.Puram Sector 5. Our quarters faced a stone tomb, which had become black with time and a thick deposition of moss growth. Every evening some kites would blacken the tip of the tomb and the skyline and would sit on there till the sky darkened. I would stare at it with amazement and often would wonder who all stayed inside. One day my mother and I became too curious and decided to visit the tomb. What I saw still gives me an uneasy feeling when I remember.

The tomb looked lonely as if it waited daily for someone to remember it. It also looked very gloomy. Ma and I decided to climb up the stairs to the tomb. It was built on a raised platform. As we reached the platform, we noticed that the front entrance was actually blocked and there was a round about to enter from the back. 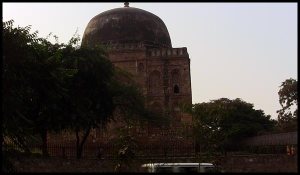 The stairs led us down and as we descended we saw that the tomb was actually two storied. and there was a courtyard in the middle. We had actually entered from the second story. Both the stories were divided into compartments and all the compartments carried a grave. Graves of all sizes, tall middle short, all sizes. We stood dumb for a moment. The tomb had seemed a bit mysterious but when I stood looking at the graves, I could only stare at them. No one knew who rested there and why so many small graves could be seen there. The courtyard had three long graves.

Maybe it was a family tomb belonging to some nobleman’s family during the time of Lodhis rule in Delhi. Maybe the family was afflicted with some disease and all died , an epidemic? May be there was a war or a local fight, a communal skirmish leading to violence? Something communal? Were people this divided even then? Or may be a tale of vendetta? Two families fighting over property, lovers, boundaries? Who knows! The number of small graves were too many and brought thoughts of death and destruction of the worst kind to my mind.

The kites were flying overhead, as usual it was the evening time and they were there to sit on the tomb. The ‘Gumbad’ as it was known in the neighborhood, soon stood tall and proud in the dusk. Ma and I walked slowly back to our quarters.

Later, when I  asked many people about the Tomb, some had said that it was known as a ‘baoli’ but ‘baoli’ means a grand house . But this was a graveyard. Some said it was Birji Khan’s tomb. Birji Khan was a nobleman in Sikander Lodhi’s court. 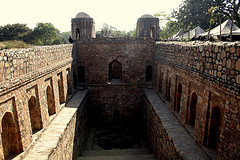 These pics are just an example of what that ‘Gumbad’ looked like. Maybe the Gumbad was really one of those I mentioned. But no historian talks about the series of small graves in side the Baoli. I still wonder who or what had killed those children? Thinking about it still saddens me. If anyone can tell me the Tomb’s history, please let me know, I am still wonder about those buried deep inside the graves…specially the small ones.

0 Responses to A walk down the memory lane: Delhi.